The new releases at The Lilypad have gotten my gears going and my December Daily preparation has begun! This month's Memory Pockets Monthly made it so easy.. 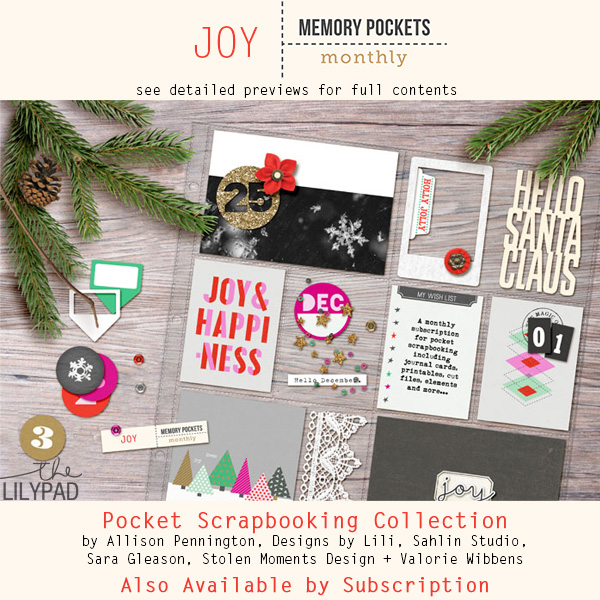 I know it's only the second month, but this month's kit is a big favorite of mine!! I made a few pages that will go in my 2014 album. I am planning to assemble the album from scratch. These pages are 4"x6" or 4"x4" in size.

Here's a closer look at a couple of pages.

Hot pink, white and black?? I am digging this combination!

I wasn't planning to make Christmas cards this year, but this card right here is making me reconsider!!

I also combined this gorgeous kit with a bunch of the add ons to scrap a few digi pages. I simply couldn't stop using it.. I am in love with the colors SO much!!


But that's not all to get your Christmas crafting going. This month's Mixed Media Monthly (M3) kit is super festive:

It includes papers, elements, cut files, alpha, and even a gorgeous template that I used in this page.


And it gets even better.. the Mixed Media Monthly kit is a perfect match with all the Document Your December products! I didn't have time to use them last week when they were released, but I definitely did use them now. :) I love them!


I love the gold and pink bits! Finally, I made another page with the M3 with more traditional colors (and some pink thrown in for good measure :)).


My plan for today is to put up the tree. Feels about right, doesn't it? :)

Finally, there are also some great new products in the store that don't fall under the MPM or M3 umbrellas. Of course I had to scrap with a few of those too. :)


Don't miss the Black Friday / Cyber Monday sales at The Lilypad! Nothing beats online shopping as far as I'm concerned! :)
Posted by Cristina at 2:56 PM No comments:

This post was originally posted on the write.click.scrapbook blog.
The most wonderful time of the year is starting soon.. and I am starting to make plans on how I want to document December this year.
I have completed a December Daily album in each of the past four years, and I am at it again this year for the fifth album. This really is my favorite project. I love Christmas, and I love documenting it.
In these past four years, I have taken different approaches to putting my album together, and I want to share my impressions with you. Each of these four albums was put together using my stash.

In 2010, I used a 2-ring album. The pages were all hybrid, and I used my Silhouette extensively. In 2011, which was once again all hybrid, I assembled the album using my Cinch. In 2012 and 2013 I used pocket scrapbooking. Here's a look at the inside of the albums.

I love combining different shapes and textures in the album - you can see how I used bubble wrap at the front of my 2010 album and vellum at the front of the 2011 and 2013 albums.

What I liked & what I want to change

And here is a peek at some random pages in my albums.

As you can see, in my 2010 album I combined a lot of different shapes of pages. I love this and want to do it again in 2014!
In 2011, I added lots of journaling to tell my Christmas stories. I used each 2-page spread per day, one story per day. I want to do this again in 2014!
In all my albums, the number of the day is featured prominently. I want to do this again in 2014!
The pocket-album approach I used in 2012 and 2013 made it very quick and easy to put together my album and I was able to use up a lot of journal cards from my stash, but I found myself writing less. I also dislike that the different textures get lost behind a plastic protector.  I will not do a pocket album in 2014.

My process
In 2010, my first December Daily, I pre-made all the pages because I was traveling for most of December. I ended up not being able to keep up with the album during my trip, and finished it a few months later. The other three years I worked on my album as we went. In 2013 I actually fell behind and I finished my album after the summer. I definitely lose inspiration if I don't work on my album in December, so I will try to stay current as much as I can. But I know now not to worry if that fails, because I can catch up when things slow down. In any case, I find that waiting to have my pictures in front of me works best, rather than having all the foundation pages made first. I will make a list of Christmas topics to use for the days in which I don't have any Christmas-related story to tell.
And now.. I'd love to hear from you! Are you looking forward to December? What are your plans for documenting this month? Leave me a comment and let me know!
Posted by Cristina at 10:00 AM No comments:

The new Christmas brushes in Ali Edwards's store are perfect for December Daily! I am not quite in Christmas mode yet (waiting for Thanksgiving to be over) but I found that they were perfect to scrap the crazy weather we've had this past week! :)

Credits:
Memory Pockets Monthly: Gather at The Lilypad
Nutmeg papers and Cut It Out: Gather by Valorie Wibbens
Noel Brushes by Ali Edwards

Here are a couple of details of these lovely brushes:

I also stamped a cute little squirrel to match the one in my photo.

The snow's all melted now, but I think it will be back soon. What a merry fall indeed! :)
Posted by Cristina at 12:57 PM No comments:

There is still over a month to go before Christmas, but Christmas scrapping is well under way here. :) I never end up scrapping much of Christmas at Christmastime, but here I am now scrapping photos from last year. The deals in the Something Old, Something New (SOSN) sale at The Lilypad were perfect for this.

I have to say I really love how this page turned out!! For some reason my other page has a similar color background, but the feel is quite different.


I do hope we get a white Christmas this year too! I think we've only gotten one non-white Christmas in the 7 years we've lived here, and it was raining to boot - no fun at all!

That's all I have for now, but be ready because some new Christmas products will be in the store this weekend for Document Your December!
Posted by Cristina at 7:31 AM No comments:

I Am Thankful For...

I love how Ali Edwards's scrapbooking style is focused on telling stories. She is a huge inspiration for me, especially as I am tackling Week in the Life for my first time this year. A lot of her products are also perfect to tell the story. Like this brush set, for example..

I used Ali's digital brushes to create my journaling prompts.

I had so much fun filling in the digital prompts with stickers!

In other news, this page was all about things I am thankful for in the fall, but it looks like our winter is coming early this year.. It snowed here today. Not enough to stick to the ground, but it stuck to trees all right. I ventured out this morning to take these pictures of my layout on the porch, but that won't be happening for a while now. Sigh.. it's so hard to take decent picture in winter!
Posted by Cristina at 6:41 PM No comments:

As we transition from Fall to Winter (we did get the first snowflakes last week after all), I find myself still not quite in the mood to scrap Christmas, even though I am warming up to the idea. The products on sale 50% off this week for SOSN at The Lilypad were the perfect mix. I started out with a fall page.


And then I moved on to Christmas. :)

Week in the Life

I have never done Week in the Life before, but last week I followed along with Ali Edwards and as I was taking pictures all week I thought about all the stories this photos could tell. But at the end of the week, I wasn't quite sure what to do with those photos. But then when I saw the new templates by Paislee Press for The Lilypad, I knew it was the perfect way for me to get started scrapping my Week in the Life. I paired them with the lovely November BYOC.


The second spread documents my favorites of the week.


Now, I can focus on writing some of the stories for this week.
Posted by Cristina at 9:15 PM No comments:

Speaking of DSD sales... did you check out what's going on at Digital Design Essentials?? Everything is 40% off, and there is a gorgeous new collection called Grateful Heart that is just a steal! Grab it by Friday before it's gone!

Here's my first page with it. I loved all the pretty embellishments, so I covered my page with these little bits and pieces.

Have a great week!
Posted by Cristina at 10:45 PM No comments:

Are you all DSDed out? I hope not, because I have some more enabling to do!! :) Everything in Jenn Barrette's store is 30% off, including this gorgeous new kit:

I am so in love with that floral + bird print, that I made it the base of this card.

It is so easy to whip up a hybrid card when you have such pretty papers. Just add a sentiment for the focal point, and you're all set.
Posted by Cristina at 8:28 AM No comments:

The November challenges are up at The Lilypad, and I made a page for the template challenge using one of the lovely new kits released this weekend. 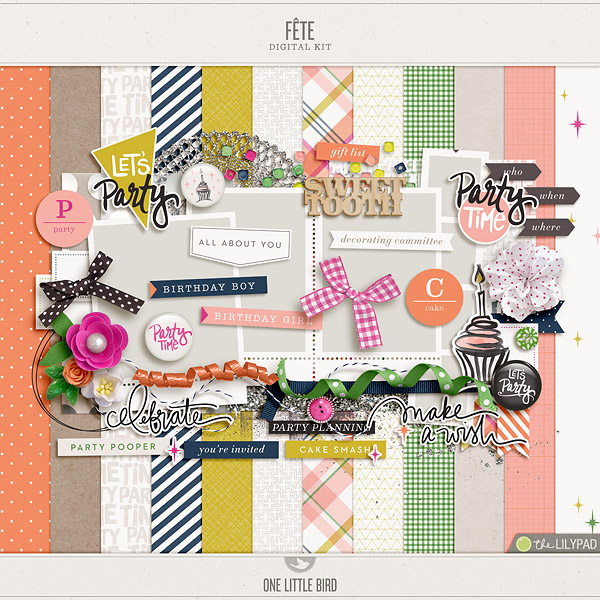 My mom sent me this picture of my dad blowing out a candle on his birthday. I am so grateful for technology and for a tech savvy mom! :)


And I am SO happy to report that my wish is coming true and my parents will be here in a little over three weeks!!! Eeeeek!
Posted by Cristina at 9:02 AM No comments:

Labels: The LilyPad CT
Newer Posts Older Posts Home
Subscribe to: Posts (Atom)
Welcome to my blog! My name is Cristina and I am a digi scrapper who fell in love in paper, so this blog is full of my digital and hybrid creations. Some of my life fills in the gaps. :)