Leora Sanford opened up her store at Oscraps a few weeks and recently had a CT call. I applied, and... I was picked! I'm so excited to be on this team! Leora has a new kit coming next week for DSD, and she's having a giveaway on her blog! Click on the sneak peek to go to her blog and enter to win. :) 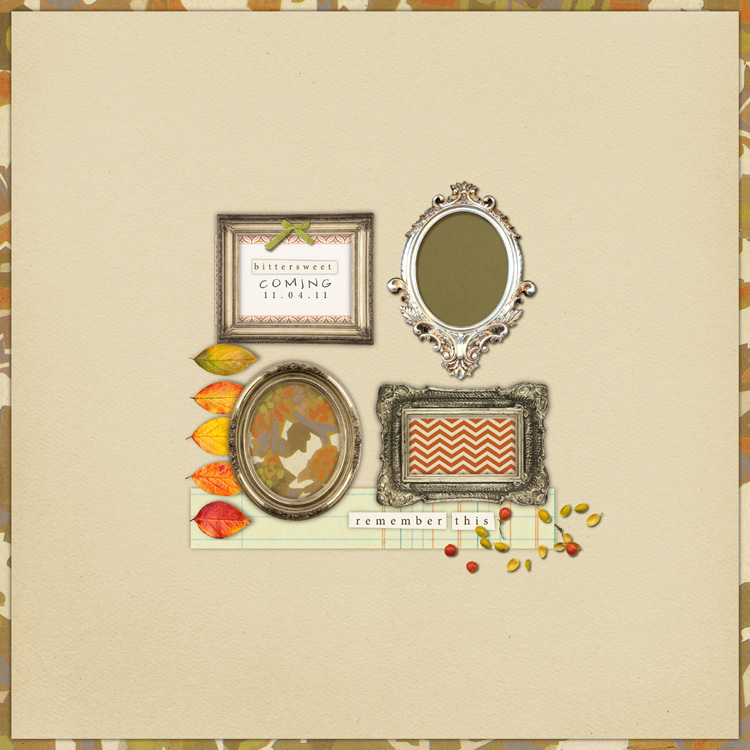 This kit is sooo gorgeous! The colors are just beautiful!
Posted by Cristina at 4:50 PM No comments:

I don't have much to share today, just one page, but I've been busy this week! I am leaving Sunday on a business trip so I've been trying to get as much scrapping as I can before that - BYOC is next week, and then there's NSD weekend, so there's so much to scrap with! Here's the kit I used out of today's beautiful new releases at The Lilypad (20% off throughout the weekend):

The colors and the doodled elements in this kit are just gorgeous, and I love how this page turned out!

Credits:
Leaves are Falling by Emily Merritt and Kate Hadfield
Topography Set No. 14 by Valorie Wibbens
Font: Typewriterhand
I am happy to say that the leaves in our front yard have mostly been blown away by the wind, and this saves us from a lot of work. Unfortunately our backyard is fenced in so we do have to pick up the leaves there, but they haven't all fallen yet. I will try to take pictures before and after our yard work so I can use the pretty rake and leaves bag elements in this kit!
Posted by Cristina at 7:44 AM No comments:

I scrapped with this gorgeous mini kit by Emily Merritt this week:

and a template by Amy Martin:

I must share a project I recently made with a great hybrid template by Simply J Studio and some of the ScrapMatters September Mix-a-Kit. I love how it turned out!

Credits:
CD/DVD Folder Template by Simply J Studio
Dandelion Dream papers, Dandelion Dream elements, and Dandelion Dream graffiti by Dream Big Designs
Hopes and Dreams Patterns by Down This Road Designs
Out of This World Alpha by geniaBeana Designs
I'm going to burn a DVD with photos of this year to go in it. :)

I haven't posted my P52 Cards pictures in quite a while now! Here's the ones for the past few weeks, including the latest from today.

You can see the Week 38 card here.

You can see the Week 39 card here.

You can see the Week 40 card here.

You can see the Week 41 card here.

You can see the Week 42 card here.

You can see the Week 43 card here.

Wow, less than 10 weeks to the end of the year!
Posted by Cristina at 5:58 PM No comments:

Jenn Barrette has a new kit out today. It's a beautiful collaboration with Shawna Clingerman.

I love all the gorgeous elements in this kit, so much that I used them as the main component for this card:

Have a fabulous weekend! I have a few fun events planned, so I 'm looking forward to that!
Posted by Cristina at 10:16 PM No comments:

I have something very, very special to share today. The designers at The Lilypad have put together an amazing collaboration kit for a very sweet girl, Melissa, who is on the CT at The Lilypad and is fighting hard against ovarian cancer. I did not know Melissa prior to joining the CT, but by checking out her blog I soon found out what a special person she is. And this kit is in honor of Melissa; all proceeds from the sale will go to her and her family as they keep fighting this battle.

I can see myself scrapping many, many page with this kit - it's so big and versatile! Here are two pages I've made so far:

Credits:
All (including template) from Hope: a Lilypad collab
Font: Pea Pumpkin Peters

Credits:
All from Hope: a Lilypad collab
Font: Pea Pumpkin Peters
Incidentally, these are the first photos I edited with RadLab and scrapped - love them!

I have more great news, and another page to share. It's time for the quarterly 30% off sale at The Lilypad, so make sure you take advantage of it this weekend!

I used this gorgeous new kit by Jenna Desai and Micheline Martin:

to scrap this page:

Credits:
Template by Sara Gleason from Hope: a Lilypad collab
Togetherness by Jenna Desai and Micheline Martin
Sigh. I've scrapped that photo before, but lately DH has been particularly reluctant in taking pictures. I will force him to take a few this weekend, so I can swap the new photo in this page. :)
Posted by Cristina at 8:15 AM No comments:

I am dying to share this project! I did it last night and I'm so happy with how it turned out!! :) Ju Kneipp and Tangie Baxter have teamed up to create a fantastic kit out today at Oscraps:

I used it to make a frame with collage houses and I am SO excited about how this project turned out!

Credits:
Creative Felicity by Ju Kneipp and Studio Tangie
Here are some details. The house on the left is all digi - it's an element made by Tangie. And it inspired me to create my own collage houses. I had so much fun with this project! ;)

Mari Koegelenberg has a great collection out today! It's 20% off throughout the weekend!

This kit is perfect to scrap little boys, but it was great to scrap my train ride with my mom too!

Credits:
Planes, Trains and Automobiles by Mari Koegelenberg
Font: Pea Pumpkin Peters
Make sure to stop by tomorrow, I have something super special to share!
Posted by Cristina at 8:29 AM No comments:


This week the 50% SOSN sale at The Lilypad is especially tempting! There are lots of products too good to pass! Here are a few I have used:

and here are the pages I did:

Credits:
New by Allison Pennington
Love Is {Keely} Wire Alpha and Love Is {Keely} Dates Pack by Karah Fredricks
Template by Sara Gleason from the Hopping Halloween collab by The Lilypad Designers
Finishing Touches 2 by Karah Fredricks
Font: Pea Pumpkin Peters
I'm trying really hard to finish scrapping all the pictures from my mom's visit in spring before she comes to visit again next month, otherwise I know they'll never get scrapped! I have been making slow and constant progress, but this is going to be a huuuge album! I'm at about 45 pages scrapped, and I will have to do at least 10 more. Help! :)
Posted by Cristina at 7:55 AM No comments:

With all the excitement for the Halloween Bash at The Lilypad this past weekend, I forgot to post a new card I did with lots of Sahlin Studio goodies, including some new releases and some October BYOC products.

What better kit for a blog hop that the awesome Hopping Halloween by the designers from The Lilypad and Oscraps? ;) The collab is on sale this weekend, so make sure to grab it now!

My favorite Halloween picture is one from kindergarten. I was dressed up as a witch, and my mom had made me a lovely lil' broom. So I scrapped this page with it:

and I turned this into a quick page for you all to have! I hope you like it! Make sure to leave me a comment if you download. :) ETA Nov. 5 - thanks for your interest, the freebie has expired.

Now, it's time to head over to the next spooky fabulous stop of the blog hop, Diane's blog. If you get lost, head back to the blog at Oscraps and keep in mind the blog is scheduled to go live on Saturday, so be patient if not all the links are there. And have fun! :)

Stop by the forum at The Lilypad for fun games and prizes!
Posted by Cristina at 11:00 PM 14 comments:

For the past couple of weeks, I've been talking DH into letting me buy RadLab. Why? Well, here's my thought. I dislike photo editing. I have a bunch of free photo actions installed in my Photoshop, but end up running the same 2-3 all the time. I thoroughly hate having to run an action to know what it will look like, just to end up not liking it 95% of the time. It is such a huge loss of time. So when I heard about the new product by Totally Rad, RadLab, I immediately thought it was made for me: instead of running actions, you apply stylets to the photos. Technicalities aside, the point is that you get an instant preview of what your photo will look like, without having to wait for any action to run! Magic!! And the interface is really cool and easy to use. Anyway, the price is pretty steep for me (especially since I just confessed I don't like to edit photos... ;) ), so I've just been dreaming about it for a while. But then the people at Totally Rad (I guess the name didn't come out of nowhere, huh? ;) ) put out a 30-day trial of RadLab, so I went and installed it. It really is magic like it sounds. Here is the first example I ran. I started with a very crappy photo DH took of me last Halloween.

Yak. I just played around with the 'actions' I liked the most, and ended up with this:

Now, if I were to show it to DH, I'm sure he'd say that it looks a bit yellow. ;) He's unartistic like that. Umpf! :) Honestly, though, I have never received so many comments in the gallery for my photo processing. Here are some of the comments I got in the galleries for this LO: "LOVE the effect on the photos - makes them look kinda spooky :)"; "[...] great photo effects too", "This is beautiful! I love the edit on the photos! Great choice for the background paper."; "This is awesome!!! Love the photo, love the patterned paper!"

Here's the close up:

OK, let's look at another example. It's yet another horrendous photo of me taken by DH. Last year he botched all of the photos of my birthday, but I really wanted to salvage this one.

A few months back, I used a mish mash of actions to produce this result, of which I was (and still am) very proud:

Now, playing with RadLab, I came up with this instead:

After bunch of actions:

The result is clearly over-processed to compensate for the awful picture (in fact there is plenty of color noise, especially on the dress, and what not), but I think I do prefer the RadLab result.What do you think? I asked DH and he also likes the RadLab edit best.

Speaking of crappy pictures, I also edited one of the pictures my mom took with her point-and-shoot during out train trip last May. Here's the before:

As a last example, here's how I edited a photo that was already pretty good. Before:

As much as I've been loving RadLab, there are a few things I wish were different. Here are the complaints I have:
In conclusion, I have to say after just a few days of using it, I am totally sold on RadLab. The price is a bit high for my pocket, though, so I am hoping to score a Black Friday sale or something (fingers crossed!)...
Posted by Cristina at 9:02 PM No comments:

Newer Posts Older Posts Home
Subscribe to: Posts (Atom)
Welcome to my blog! My name is Cristina and I am a digi scrapper who fell in love in paper, so this blog is full of my digital and hybrid creations. Some of my life fills in the gaps. :)